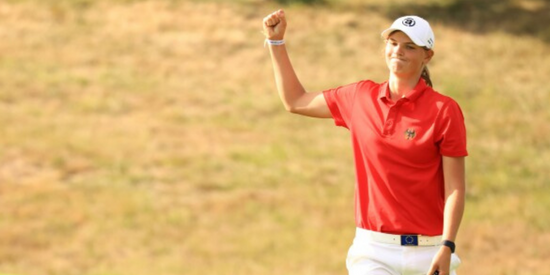 Helen Briem posted a 5-under 66 and teammate Alexandra Forsterling shot a 1-under 70 as Germany took a four-stroke lead over the United States and Chinese Taipei with a score of 136 in Round 3 at Le Golf National which is the second lowest in World Women’s Amateur Tag Team Championship history. “It’s unbelievable. The girls were on fire today,” Germany captain Pia Gassner said. “They played their hearts out. They played brilliantly. They wanted it and kept it going even when the last holes are so tough. They did a great job.”

The Germans sit 13 under par at 415, with the United States and Chinese Taipei tied for second at 419. Sweden, who held the 36-hole lead by two strokes over Germany and the United United shot 143 and sits in fourth place.

Briem, who was a member of the 2021 Junior Solheim Cup-winning European squad, hit five of his first seven holes and finished with eight birdies to three bogeys.

“It’s not often you play with world No. 1 (Rose Zhang, USA) and No. 2 (Ingrid Lindblad) in the same flight,” Briem said. “I was a little nervous at the start because there were so many people. After I left I felt much calmer and went down.

Gassner felt that an unassuming attitude upon entering the WWATC worked in his team’s favor.

“Sometimes when you don’t have expectations, that’s the best thing,” she said. “You don’t put pressure on yourself. They just came out and played and played well. Now we have to manage expectations for tomorrow.

Rose Zhang of the United States, who scored a 2-under 69, had a positive outlook for her team’s position.

“We just have to stay steady and have the mindset that we’re behind, but we have the skills and the mental toughness to push forward,” said three-time award winner Mark H. McCormack. “We are better coming from behind and it’s a team game. I think nothing is impossible. I have complete confidence in my teammates. »

Spain moved up to fourth place, followed by France and Japan tied for sixth. Canada is eighth and Australia, England and Scotland are tied for ninth.

In 1958, the United States Golf Association asked the R&A to join them in sponsoring a world amateur golf team event to be played every two years in non-Walker Cup years. Between 35 and 40 nations were represented at the first meeting and President Dwight D. Eisenhower presented the trophy bearing his name. The committee for the event was to be known as the World Amateur Golf Council and is now the International Golf Federation. Teams of four players from each country competed over 72 holes with the top three scores from each round to count. The first competition was between 29 nations at St Andrews, with Australia beating the United States in a play-off. In 2002, the format changed to teams of three with the top two scores counting.