The Coinbase app crashed just seconds after viewing a unique ad displaying a single QR code bouncing across the screen during its Super Bowl debut.

The 60-second commercial showed a bouncing colorful QR code almost entirely, bringing back memories of the bouncing DVD logo. Once scanned, the digital code redirects new users to Coinbase’s promotional website, offering a limited-time promotion of $15 free Bitcoin to new customers and the chance to participate in a $3 million giveaway.

But the game’s huge audience – estimated at 117 million – quickly crashed the app after logging in to check it out, leaving many users disappointed.

The promotion is valid until February 15, but new customers may have issues signing up for their $15 credit after the Coinbase app crashes, likely due to the heavy influx of traffic from smart ad.

Since the Super Bowl is one of the most-watched shows on TV every year, there’s no better platform for companies to showcase new commercials to the world. The game is shown on over 225 different TV channels, aired on around 450 radio stations, and watched in nearly 180 countries around the world.

NBC – which is the official channel airing this year’s Super Bowl LVI game – announced last week that all Super Bowl advertising slots had been filled, with several as short as 30 seconds running out. sold for a record seven million each. 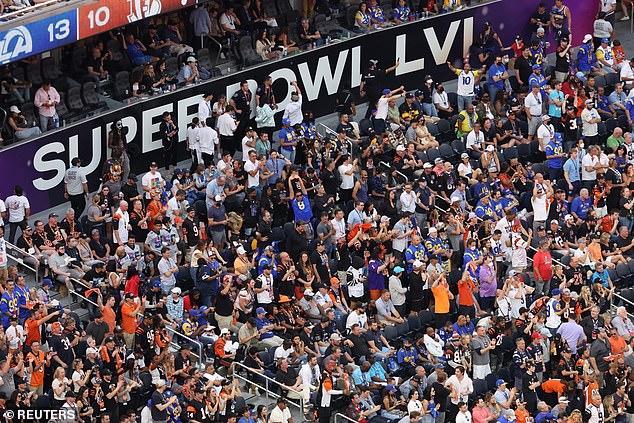 Many fans took out their smartphones at SoFi Stadium, where the Super Bowl between the LA Rams and the Cincinnati Bengals is played, to scan the Coinbase announcement, driving a lot of traffic to the exchange company’s website. cryptocurrencies.

The company is a popular cryptocurrency exchange platform that makes it easy to buy, sell, and trade digital currency. He claims this makes “buying Bitcoin as easy as buying a stock through an online brokerage.”

Cryptocurrency companies are among this year’s biggest Super Bowl sponsors, with several companies – including Crypto.com and FTX – using the big game to promote their services, NFTs or other related projects.

Some fans took to Twitter to express their delight that the app crashed, while others chose to criticize the company for not investing in better servers.

User, @auspiciously_t, wrote: “Coinbase, how are your servers going to crash after a scheduled Super Bowl commercial?”

While another user who goes by the name Vanessa, tweeted: “#Coinbase how can you drop this ad and then for the app to crash #SuperBowl.”

Natalie Brunell, the host of the Coin Stories on Bitcoin podcast, responded by revealing how much Coinbase had invested in its advertising: “Coinbase paid 150 #Bitcoin to crash its site,” with the hashtag #priceofSuperBowlAd.

Another account, known as “CrypoBull2020”, shared, “It’s beyond me how a billion dollar company is incapable of creating servers that prevent a website crash.”

Fans of Coinbase’s Super Bowl ad took to Twitter to report that the cryptocurrency exchange company’s website crashed after too many viewers scanned the ad’s QR code.

The company also used the hashtag “WAGAMI”, a commonly used acronym in the crypto industry that stands for “We’re all going to make it happen”.

Established in 2012, Coinbase states on its website that its mission is to bring “the radical idea that anyone, anywhere should be able to send and receive Bitcoin easily and securely.”

The company says it is “building the crypto-economy” with what it calls “a fairer, accessible, efficient, and transparent crypto-enabled financial system.”

“Today, we offer a reliable and easy-to-use platform for accessing the broader cryptoeconomy,” the company adds.

According to its website, more than 73 million verified users have signed up for the service in over 100 countries.