The Benicia Amateur Radio Club was founded in 1979 by Dick Gaul (above) and is still in operation today. The club recently participated in the annual nationwide emergency simulation test to help local firefighters and police during a crisis.

BENICIA – The Benicia Amateur Radio Club participated in the annual nationwide emergency simulation test sponsored by the American Radio Relay League to improve the skills of amateur radio operators who assist local firefighters and police during a crisis .

Hobbyists across the country operated their stations on emergency power to simulate a situation where all normal power and communication media, such as land phones, cell phones, television, and radio, have been cut.

Since amateurs, also affectionately known as “amateur radio operators” operate independently of these other services, they are essential during large-scale and rapidly developing dangerous events.

Even though their equipment is made up of some of the most sophisticated digital technologies, testing has proven that reliable and true Morse code is able to deliver simulated emergency messages when other means cannot. Fortunately, many hams are still learning and practicing this skill.

The Benicia Amateur Radio Club was founded in 1979 by Dick Gaul, whose radio station callsign is K2GMY. Several volunteer and civilian firefighters from Benicia then joined him to serve our community. He participated in the nationwide exercise from his station which can be self-sufficient using solar power, battery and generator in the event of a commercial blackout. The club has since grown into one of the most active groups in Northern California, with nearly one hundred members. licensed radio amateurs. 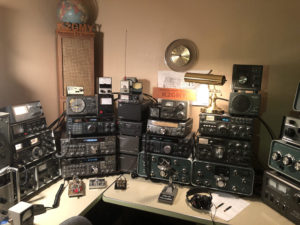 A view of the operating equipment of the Benicia Amateur Radio Club. The club has grown over the years to reach almost 100 members.

As they grew, they responded to many emergencies including fires, accidents, search and rescue operations, and many other activities requiring enhanced radio communication skills. They work with Red Cross and Solano County agencies in crisis situations. They volunteer thousands of hours each year.

You can recognize them by their bright yellow vests with “RADIO” engraved on the back at many civic events, like the 3rd. July and Christmas parades; among others.

Although this national ARRL test takes place once a year, the Benicia Amateur Radio Club continuously trains its members who activate their equipment throughout the year.

The club meets the second Tuesday evening of the month at the downtown fire station at 7 p.m. However, during Covid-19, meetings are held by teleconference.